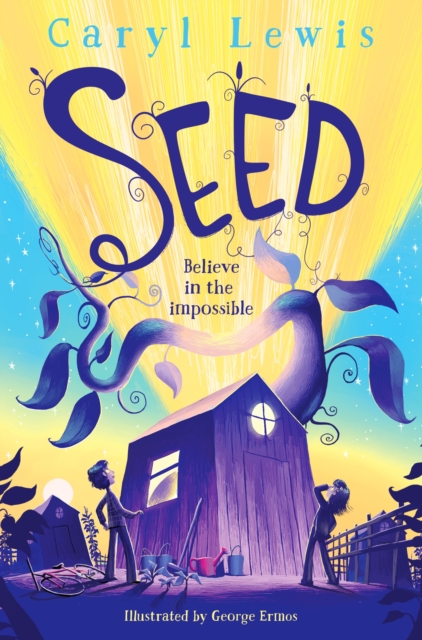 A warm-hearted, joyful story about the power of hope and imagination and believing in the impossible.

Marty doesn’t have new white trainers or a games console. He doesn’t have much of his own at all, unlike his mum, who has billions of things: newspapers, holey shoes, rusty lawnmowers, broken picture frames – she keeps EVERYTHING! Marty does his best to look after her and finds solace hanging about with his spritely grandfather, on his allotment. On Marty’s birthday, Grandad, with a glint in his eye, gifts Marty a very special seed. Grandad hasn’t been this excited since he invented the bum scratcher 2000 or thought he’d brewed wonder fuel from rhubarb leaves! The seed grows bigger and bigger, and launches Grandad, Marty and his best friend Gracie on an impossible, wondrous plan fuelled by love, hopes and dreams….

With a touch of ‘Jack and the Beanstalk’ magic, this sweet story will appeal to 8-11 year-old readers who like Jenny Pearson and Lisa Thompson. Fun fact – this is Caryl Lewis’ first English-language book – she is a multi-award-winning Welsh language novelist and scriptwriter who also wrote the brilliant BBC Wales detective series, Hinterland.